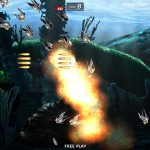 There will be three DLC packs released on all platforms called RayForce, Night Striker, and Metal Black. “Each pack will include one new ship from the game of the same name, unique levels, and remixed music from said game,” writes Degica. “Note: the new levels play similarly to CS mode (in 16:9 aspect ratio) and the DLC ships are only usa...[Read More]